August 13th to August 20th of 2012
Greetings to all from the beautiful port of Cabo San Lucas,
Finallywe were lucky to have 211.50 mm of rain inCabo, we had a long time without stormsand the droughtbegan to worry a lot, afterseveral days of rainwe expect our aquifers recoverslightly, and fishing as always in thesecases it gets really good, although we cannot complain,fishing for Dorado’s, Yellow fintuna and marlinwas excellentbefore the storm.
Hoping that this information will help you plan your stay in Cabo and enjoy this wonderful activity such as Sport Fishing.
Overall Catch Success Rate 75% (all species combined)
BILLFISH: Great weather after rain, As always when the weather improves favorably fishing changes in different fishing bank located in the Sea of ​​Cortez and Pacific side begin to have very good catches. This week’s sixty- five percent of charters in town caught marlin with most catches one or two fish, Ursula IV manned by Captain Ricardo Agundez “El Caba” Happy to report total 28 Striped Marlin, 1 sailfish, not bad for almost two weeks!! most were released

OTHER SPECIES: Dorado are closer to San Cristobal and old Light house, crews reported that 45% of fleets are having luck for Dorado, the same happen with the tuna. On the shore the smaller vessels such as Panga’s reported Roosterfish & skipjack about 15 to 20 lbs.
Althoughmore scattered showers forecastthese days, we see excellentweather forour fishing.
Hope to have an excellent and long season as each year at this time. 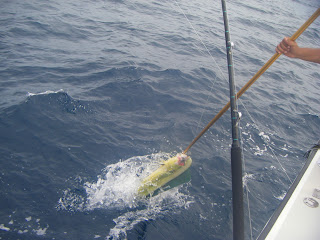 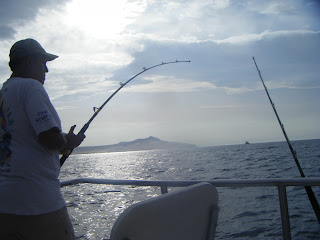 Thanks to friends who have inquired about the health of my father,
it is more stable, and we all hope that his health continues recovering well,
he is a strong man and this will help a lot to him in his recovery.
Let me tell you also that Fishing is excellent from last week,
crews reported Striped Marlin, Dorado and Tuna,
Nice weather, good fishing, and positive energy.

we can not ask for more.

Posted by Ursula's Sportfishing Fleet at 10:00 AM No comments: 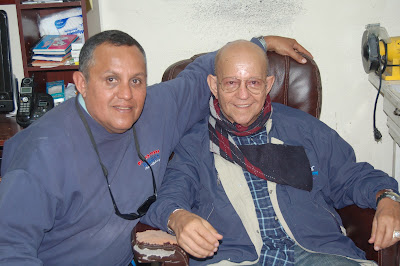 My father in the hospital, he enjoys fishing like me, he has been part of my life, from him I learned many things that have accompanied me throughout this life, when I was a kid he took me to fishing and diving to the island called Espiritu Santo, with him and my uncle Oscar, they taught me the art of fishing,
part of who I am I owe to my father, I hope that God  and life allows us to have more time to enjoy
and I hope he recovers soon,
it will be because he is very strong.

Olter..
Posted by Ursula's Sportfishing Fleet at 6:12 PM No comments:

First Marlin for the Doctor Robert Boss from Boardman Oregon. 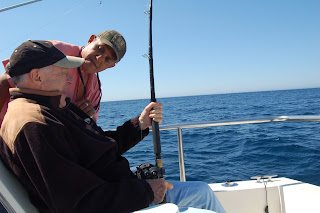 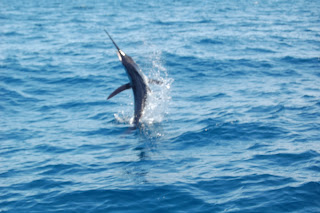 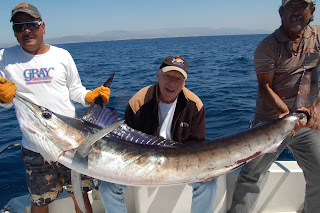 after a good fight 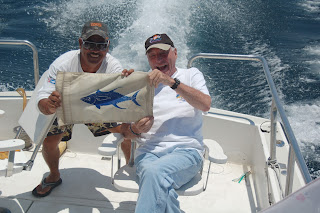 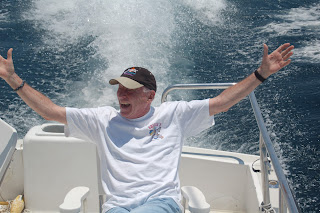 Posted by Ursula's Sportfishing Fleet at 11:03 AM No comments:

Greetings to all from the beautiful port of Cabo San Lucas,


We resumed our reports back on this blog due to some adjustments to our website was not 'possible to update an apology and continue reporting, hoping that this information will help you plan your stay in Cabo and enjoy this wonderful activity such as Sport Fishing.

BILLFISH: Great weather this weeks As always when the weather improves favorably fishing changes in different fishing bank located in the Sea of ​​Cortez and Pacific side begin to have very good catches. This week’s Fifty five percent of charters in town caught marlin with most catches one or two fish, Ursula IV manned by Captain Ricardo Agundez “El Caba” Happy to report total 22 Striped Marlin, 2 sailfish, not bad for almost two weeks!! All fish were released.

OTHER SPECIES: Dorado starts a little slow with reports of 35% of the boats by the conditions we have the Dorado’s will improve through the days moving closer, hope the same will happen with the tuna, on the shore the smaller vessels such as Pangas reported Roosterfish & skipjack about 10 to 15 lbs.


Hope to have an excellent and long season as each year at this time.


LOCATION: Three to fifty miles out from Lands’ End and the Lighthouse, 95 spot, Palmilla, Punta Gorda.

LIVE BAIT: caballito, ballyhoos, sardine
Thanks and see you on the next report !!
Kathy & Olter Schcolnick.
Posted by Ursula's Sportfishing Fleet at 10:54 AM No comments: 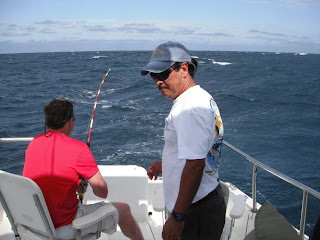 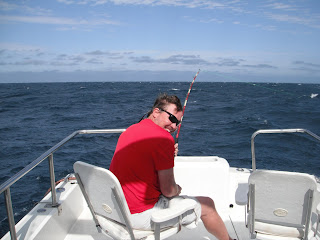 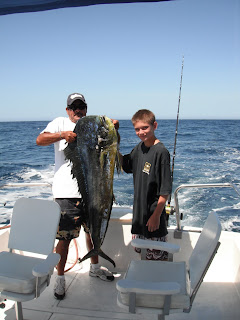 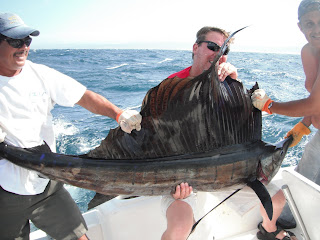 Last July we had the pleasant visit of our client and friend Steve O'Neal,

accommpanied by his beautiful family, they enjoyed fishing and Tina´s birthday

Hope to see them back soon !!! 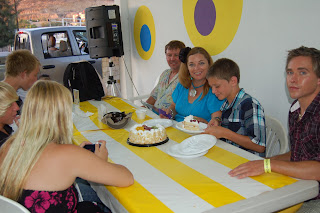 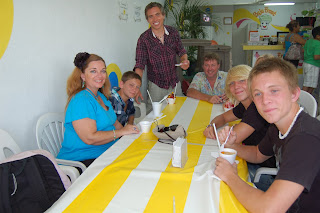 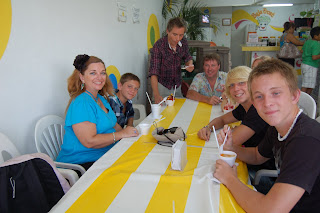 Posted by Ursula's Sportfishing Fleet at 12:34 PM No comments:

Billfish: Start to get the blue, black marlin and sail fish they are already in all the areas out by the warm ocean currents, since last week we had very good reports and blue marlin catches on average around 4 per week 275lbs of weight with the exception of a blue marlin of 475 lbs.

Some black marlin has been reported by our boats in the fishing grounds known as Golden Gate and the 11.50 spot. 27 July our good friends O'Neal family went fishing in the Ursula IV boat, that day was doing a lot of wind but the purpose was to find a Roosterfish to Steve and then go offshore to look for a Marlin his father in low, since in the last two attempts were not lucky that day we sailed northwest into the wind to a place called San Jaime Bank and about 11 miles out we saw Dorado Mahi-mahi and catch 2, one small about 20lbs and other medium 30 pounds, Miguel the assistant prepare a bait to troll and switch in less than 20 minutes a sailfish, came and pulled the bait , Mr. O'Neal fought about 25 minutes with the Sailfish and we raise it for a quick photo and release it.
Then we went to the east into the wind where we had other sightings and pulled another sailfish but we lost

On July 29 Mr. Bryan Swiniarski and his friends went fishing and had a great day catching a Marlin 310 lbs and 4 Yellow fin tuna, on the same day Greg Grof on board Ursula IV caught and released two sailfish about 75 lbs , 2 Dorados (Mahi-Mahi) around 45 lbs.

We hope to have a great season of fishing for big blues.

Many schools Dorado (Mahi-Mahi) and tuna.

OTHER SPECIES: Although the rains have not come to Cabo San Lucas which benefits the group of species such as Dorado, Wahoo and Yellow fin Tuna and small fish that serve as food for them, as the rains are sometimes flowing streams and small pieces of wood brings organic matter which attracts these species.


The reports of our boats have been more than excellent reaching an average of 87% of all fishing trips these species of yellowfin tuna have been very close to the coast accompanied by dolphins with large schools of tuna by bringing some copies of respectable size, the locations of sightings have been from the old lighthouse and the hill of Cabo San Lucas about 4 to 8 miles from the coast.

Also fishing for Dorado has not been the exception to find Dorado’s out in front of the entire coastline and no more than 2 to 5 miles away, have been constant reports of excellent size and weighing about 20 to 55 pounds.


On July 21, our friend Mr. Steve O'Neal and his children and father went out fishing one more time aboard the good Ursula IV capturing two Dorado’sand 20 lbs and 35 lbs.

On July 26th Mr. Campanela went fishing aboard Ursula IV and caught 7 Yellowfin Tuna and 4 Dorados right in front of the lighthouse about 10 miles out of the coast.

August 01st the family of the state of Mexico Mr. Arturo Cortez Aboard Ursula IV had an excellent day of fishing catching a yellowfin tuna of 224 lbs fighting around 2 hours and 15 minutes definitely a good experience.

Posted by Ursula's Sportfishing Fleet at 9:34 AM No comments:

Ursula's Sportfishing Fleet
http://www.ursulasfishing.com When fishing Cabo San Lucas, fish with the most reliable, fun and professional fishing fleet... Ursula's Sportfishing Fleet! Olter and Kathy, (Fishing lovers) together with our crew team we are willing to satisfy all your requirements to make your fishing trip enjoyable. The abundance of fish species makes Cabo San Lucas an interesting choice when it comes to fishing. We invite you to get to know our operation and at the same time we insist you to come on down and fish with our experienced fishing Captains. Best Catch: 1991 1°-places Bisbee's catch and released Blue Marlin, 1996 Black Marlin 983lbs Members of the Independent Association Pioneers and Founders of Sport Fishing in Cabo San Lucas.